NYC, autumn 1991, FFF & co are jumping between Gramercy Parc Hotel and Green Point Studios. The recording sessions, lasting 3 months, consist in exhausting everything & everyone, as we are completely hallucinated by the people, the places, the gear, the smells, the parties, the nights, & the drugs… that surround our 24/7 lives. Marco (singer & trombone), Yarol (guitars), Niktus (basses) Crichoo (drums) & I (Hammond B3 & Keyboards) are jamming in the the Studio, while Bill Laswell (Producer) remains silent, but hums at Oz Fritz (Sound Engineer) the directives… we are free electrons jumping everywhere, playing all the time, not realizing that Bill quickly understand by deception, that it would be unwise to lead us anywhere. « One Nation under a groove… Nothing can stop us now » quickly becomes our music-director-flag. It’s a miracle that the recordings comes out so well after all the nosleep-post-nucleus-party-delirium-stoned-music we brought to the Studio… It was, however, qualified by the French Press as « exquisite taste » by « great talented » musicians. We were on the top of the wave!

Ridge Farm, Sussex, England, late Spring 1993, a time when recording studios are not a thing of the past, and when digital tape machines step in. We had previously rehearsed in the French countryside, in the mountains somewhere, we were successful enough, confident, and arrogantly craving for more music, along with the craze FFF only has the lotion. In the residential Ridge Farm Palace, we were given the keys for 3 months, Mark Wallis at the desk showing an incredible patience and humour blending him into FFF’s psychiatry, becoming an immediate friend and using exquisite skills that came from traditional recording engineers, and the ones of the 80’s. He handles FFF with the British flavor and diplomacy that struck me many times. As a brass section slips in, and a few other musicians, the sound is immediately there, we knew it was going to be a good album… the following weeks seem to give FFF a new and sophisticated try. As we finish the recording, a tour is immediately programmed, and the following year and a half will see album sales reach it’s peak. 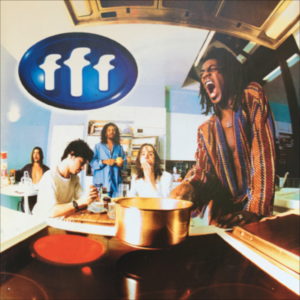 After 5 years of great songwriting and producing, of upside down partying & playing in tour busses, planes, hotels, studios, festivals, festivals and more festivals, clubs, T.V. shows… exhausted… out of control, we land in Paris, thanks to our Stage Manager Antoine Comont… finally… to chill out, think, introspect, and produce something homemade & very special: FFF, known all over Europe as a powerful Fonck Band, sit down in a Studio called « Studio Gang », known for it’s warm gear and comfy environement. The 5 friends are now more than music producing specialists. The album, made by Fred Rall & FFF, lays its artistic foundations in the 18th district. Barbes reflecting the eclecticism of Parisian culture in the 90’s. But we are worned, and tensions rise, as expected in every long love stories, and we start looking elsewhere for other projects… that, being the biggest mistake made for FFF’s survival. It will unfortunately be, with the exit of their Keyboard player, their last Major company driven album.